Diabetic Retinopathy! The Leading Cause of Blindness in American Adults Age 20–74 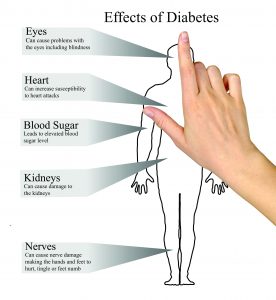 Blinding eye diseases, such as diabetic retinopathy, glaucoma, and cataracts are common with people with diabetes. Recent studies have revealed low awareness of the issue among ethnicities at higher risk for diabetes. With the findings signaling that many Americans may not be defending themselves against diabetes-related vision loss, the American Academy of Ophthalmology encourages those with diabetes to take proactive steps to protect their vision.

Diabetes puts people at risk for nerve damage, cardiovascular disease, foot and limb injuries, vision problems, and other complications that arise from having uncontrolled blood sugar, as the U.S. National Library of Medicine’s MedlinePlus guide cautions. Not to mention, diabetes raises a person’s risk of developing serious COVID-19, per the CDC.

It is estimated that 3 million people globally suffer from diabetic retinography. The World Health Organization reported that diabetics are the leading cause of new blindness cases for adults aged 20-74. There are approximately 422 million people globally with diabetes and the numbers are estimated to increase significantly in the next decade. It is projected that half of these cases will more than likely develop diabetic retinopathy (DR).

Diabetic Retinopathy (DR) is an eye disease that is a complication of diabetics caused by damage to blood vessels in the eyes. There are usually no symptoms or early warning signs.  When vision loss occurs it is too late to fully restore sight.

It has been reported that up to 21% of patients with type 2 diabetes have retinopathy at the time of the first diagnosis of diabetes. Most will develop some degree of retinopathy over time.  Fewer than 5% of people suffer severe vision loss even though many people with diabetes develop impaired vision.

The National Diabetic Association (ADA) reported that approximately 1 out of 5 Americans, 7.3 million people, have diabetics and do not know that they do. If left untreated, it can cause vision loss or even blindness.  To help you keep your vision healthy, here are five things the National Eye Institute (NEI) would like you to know about diabetic  eye disease:

No Pain and Symptoms:

You are at risk if you have diabetes

What you can do: